New milestones for the developer’s white-labeled apps for current brokers.

Source: https://www.financemagnates.com/forex/products/finatext-eyes-new-entrants-as-japans-elders-embrace-fintech/ Japan-based Finatext Ltd is a fast growing and upcoming technology provider that is barely two years old and already with over 250,000 users across its three white labeled brokerage applications for forex and stock trading. The company creates social network trading platforms that leverage education and intuitive UI/UX as the driving theme behind its community featured design, with the aim of winning new market entrants. During an exclusive interview with Finance Magnates, the company’s co-founder and CEO Ryota Hayashi explained some of its major developments including recent milestones that have helped his company quickly expand for both foreign exchange and equity-related trading apps for some of the largest Japanese brokers. A review of the total downloads on Google play alone showed between 100,000 and 500,000 downloads for the Asukabu app, and 50,000-100,000 downloads for its Karufx app, and between 10,000 and 50,000 installs for its most recently launched Fundect app.

For background, Mr. Hayashi worked at Deutsche Bank’s London office within equity research in a sales capacity for over three years, and later joined GCI Asset Management where he maintains concurrent roles within the firm’s global hedge fund sales efforts also for just over three years already and during which time Finatext was launched. Finatext was started in January 2014 and now runs one of the largest mobile stock, fx and mutual fund social network service in Japan, through its white-labeled platforms which are customized for brokers on a per-project basis. Mr. Hayashi was also a speaker on a panel that Finance Magnates organized during one of our events in Asia. Around the time of our call, the number of total active users was mentioned to be 230,000 as of the end of February, whereas March has already added 20,000 new users from across the 3 apps, thus bringing the total user base over 250,000.

The company’s founders said during the interview that if a trading platform needs a user guide, then it’s already too difficult for beginners to use. His approach was geared towards new market entrants, where people are able to learn how to trade from within the app after opening the account. Despite the already huge trading volumes that come out of Japan when compared to the rest of the world with regard to retail driven foreign exchange volumes, Mr. Hayashi  still believes that financial literacy is low in Japan due to the aging population combined with the fast speed of technology evolution. Yet, concurrently, there are large amounts of household savings, nearly 15 trillion US dollars worth in Japan, and this provides a potentially large opportunity to capture market share. After installing one of the apps on mobile, I got through the nearly 15 multiple choice questions (despite not understanding Japanese) that appear to help identify the users experience level in order to provide relevant educational and usage steps to help traders get quickly accustomed based on their level of expertise. Once I got through the questions, a game-like animation started, and I was able to scroll among different home screens of the platform by swiping left/right. The company is preparing to launch the platforms in English was well and Finatext is planning to open an office in Ireland over the new few months, also revealed during the interview.

The company was started in 2014 and employs a young team of nearly 25 people including outside contractors, who together focus mainly on mobile and web-based trading solutions that contain a social community feature. The developers use object C, Java, Ruby, and Android related programming languages as well as iOS related syntax. Mr. Ryota explained that he’s been responsible for spearheading the company’s sales efforts that helped land some of its major partnerships.

“we aim to be a global plat­form for mo­bile in­vest­ment.”

Using a pre-existing structure the company is able to white label its solution and personalize it for brokers while keeping some of the core features that have helped it reach, for example, 60,000 users within 3 months, for one of its recently-launched clients. The following chart depicts the age distribution in Japan, which highlights how the older groups represent a larger majority than compared to nearly 7 decades ago: 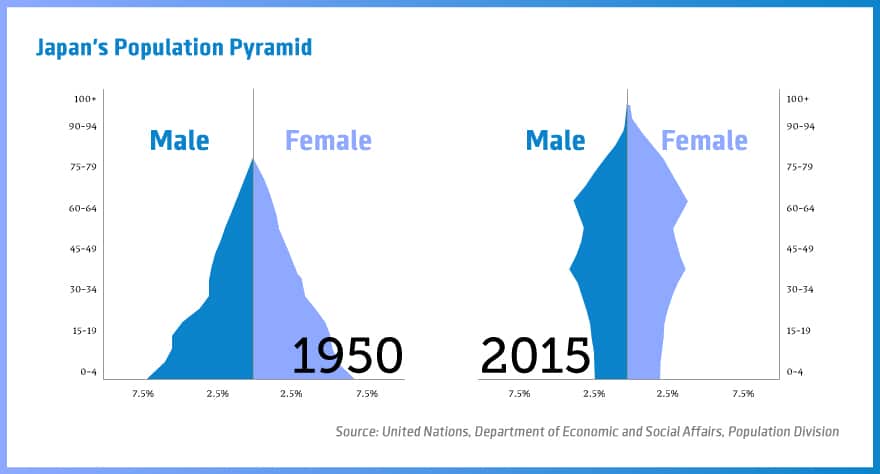 One of the company’s first clients was Rakuten, for which Finatext had created the AsuKabu.com offering for stock trading, that subsequently reached 130,000 active users. The company also recently launched a similar offering for one of Japan’s largest banks Mitsubishi (MUFG) in its subsidiary division for FX via the Fundect.com offering, as well as the Karufx.com app made by Finatext Yahoo Japan’s FX business subsidiary. The developer is preparing to launch a new product in April called ForexStream, according to Mr. Hayashi. With regard to the roadmap ahead and next steps, the company’s founder said that Finatext had already rejected a number of venture capital funding offers within Japan, as he would instead prefer to focus on growing internationally (and receiving funding from an outside company) and already has plans to open up an office in Ireland within the next two months. Mr. Ryota said: “we aim to be a global platform for mobile investment.”

The company helps brokers onboard accounts using an affiliate structure for the commercial agreement and looking at the introducing broker (IB) structure as well for other jurisdictions, as the difference between each structure can vary with regard to regulatory requirements, such as in Japan where the affiliate model is easier to implement.   The affiliate model has served well for conversions for Finatext, yet the IB model would enable the firm to see longer term value capture from clients’ ongoing usage versus just the initial live account activation and funding – when the affiliates’ work ends. For a technology and platform developer, it’s not uncommon for various commercial terms to be negotiated beyond standard affiliate and IB contracts and/or variations of such boilerplate agreements. The firm maintains that it is well known in Japan, while outside of the country it hopes to become well known internationally – as it prepares to expand. A fourth app that the company has created is also being launched in English and is expected by the middle of 2016.

Interestingly, the firm also resells data which adds to the diversity of its already varied operation, where Finatext can use the data for related asset class market prices into its platforms in cases when the broker requires it. The firm also organizes events and actual community gatherings and not just online, whereas within the app people can follow or unfollow other traders. The company has a team that arranges meetups on a regular basis, and therefore, its overall business model has unique or hybrid features bringing together components that form its overall value proposition.